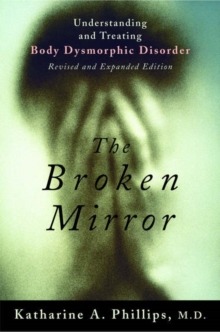 by Katharine A. (Chief of Outpatient Services and Director, Body Dysmorphic Disorder and Body Phillips

Jane is an attractive woman in her mid-thirties, tall, thin and stately. She believes she is breathtakingly ugly. Tormented by what she sees as her huge nose, crooked lip, big jaw, fat buttocks, and tiny breasts, she hasn't left her house in six years. Though she lives in the same house as her mother, she once went two years without seeing her.

When relatives come over, she avoids them, hiding in her room, even on Thanksgiving. The one time she left the house -forced to see a doctor - she covered her face with bandages. Eventually, she attempted suicide. "I can't imagine any suffering greater than this," she said. "If I had my choice, I'd rather be blind or have my arm cut off. I'd be happy to have cancer."Jane has body dysmorphic disorder, or BDD. In this revised and expanded edition of The Broken Mirror, Dr Katherine Phillips draws on years of scientific research, clinical practice, and detailed interviews with patients to bring readers an updated and expanded book on this troubling and sometimes debilitating disorder, in which sufferers are obsessed with perceived flaws in their appearance. Phillips describes severe cases, such as Jane's, but also milder cases, such as Carl, asuccessful lawyer who uses work to distract him from his slightly thinning hair. Many sufferers function well, but remain secretly obsessed by their "hideous acne" or "horrible nose", sneaking constant peaks at a pocket mirror, or spending hours redoing makeup. BDD afflict millions of people. It isn't anuncommon disorder, simply a hidden one, since sufferers are often embarrassed to tell even their closest friends about their concerns; one woman, after fifty years of marriage, still kept her appearance worries a secret from her husband. This revised and expanded edition of The Broken Mirror provides updated information from recent research that sheds new light on this serious illness. Besides the fascinating story of the disorder itself, The Broken Mirror is also a lifesaving handbook for sufferers, their families, and their doctors. Left untreated, the torment of BDD can lead to hospitalization and sometimes suicide. With treatment, many sufferers are able to lead normal lives. Phillips provides a quick self-assessment questionnaire, helping readers distinguish between normal appearance concerns and the obsession of BDD to determine whether they or someone theyknow have BDD. She includes common clues to BDD - such as frequent mirror checking, covering up with clothing, and excessive exercise. Four new chapters on treatment contain updated information and recommendations on how to effectively treat BDD - as well as frequently obtained treatments that should beavoided. A revised chapter offers helpful advice and reassurance for friends and families of BDD sufferers. Profoundly affected by the disorder themselves, those who care about someone with BDD will find both helpful advice and reassurance in this indispensable book. The revised and expanded edition of The Broken Mirror is the most comprehensive book on BDD and is written by the leading expert on this disorder. It is essential reading for psychiatrists, other mental health professionals, dermatologists and plastic surgeons; for the friends and family concerned about a loved one who won't believe their reassurance; and for the millions who suffer from BDD in silence and secrecy.