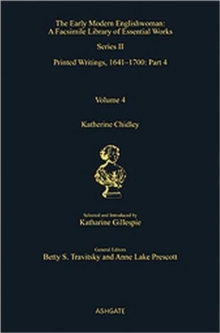 Katherine Chidley was a religious and political activist who dissented from the established church throughout the 1620s, 30s and 40s; supported the parliamentarian cause against the royalists during the English civil wars of the 1640s; and sided with the proto-democratic Levellers against the more authoritarian regime of Oliver Cromwell during England's short-lived but influential republican era of the 1650s. During the early years of the English civil wars, debates raged between radical separatists and those such as the Presbyterians who opposed the Anglican Church and its bishops while insisting that some sort of state control over religion be maintained.

Thomas Edwards was one of those who hoped to persuade Parliament that a compromise should be reached between total conformity and complete religious freedom.

Between 1641 and 1645, Chidley published three works disputing his anti-separatist arguments and promoting the far-reaching principle of the separation of church and state. These are reprinted in this volume along with Katharine Gillespie's excellent introduction to Chidley's life and works.