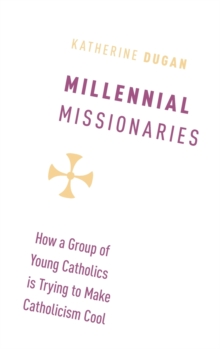 Millennial Missionaries : How a Group of Young Catholics is Trying to Make Catholicism Cool Hardback

Millennials in the U.S. have been characterized as uninterested in religion, as defectors from religious institutions, and as agnostic about the role of religious identity in their culture.

Amid the rise of so-called "nones," though, there has also been a countervailing trend: an increase in religious piety among some millennial Catholics. The Fellowship of Catholic University Students (FOCUS), which began evangelizing college students on American university campuses in 1998, hires recent college graduates to evangelize college students and promote an attractive and culturally savvy Catholicism.

These millennial Catholics have personal relationships with Jesus, attend Mass daily, and know and defend papal teachings, while also being immersed in U.S. popular culture. With their skinny jeans, devotional tattoos, and large-framedglasses, FOCUS missionaries embody a hip, attractive style of Catholicism.

They promote a faith that interweaves distinctly Catholic identity with outreach methods of twentieth-century evangelical Protestants and the anxieties of middle-class emerging adulthood.

Millennial Missionaries examines how these young people navigate their Catholic and American identities in the twenty-first century. Illuminating the ways missionaries are reshaping American Catholic identity, Katherine Dugan explores the contemporary U.S. religious landscape from the perspective of millennials who proudly proclaim "I am Catholic"-and devote years of their lives to convincing others to do the same.