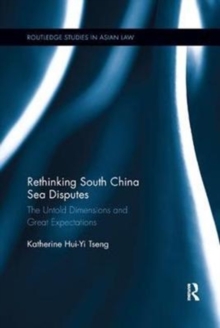 The proposed book draws on the on-going South China Sea dispute, and the multifaceted challenges wrought by the South China Sea issue that requires an inter-disciplinary perspective.

It employs legal-analytical methods, to emphasize the nuances of the role and interpretation of international law and treaties by China in different periods, while taking into account policy and strategic concerns, which generally cast great sways in decision-making.

The re-introduction of interdisciplinary concerns straddling law and history illustrates that the historical dimension, which has long been neglected, is an emerging concern that poses looming dangers that may unexpectedly radicalize the friction.

Contributing to debunking the mystique wrought by confrontations between a historical and a law-dominated perspective, these perspectives are supported by a more nuanced analytical framework, featuring theoretical concerns with a tinge of practicality.