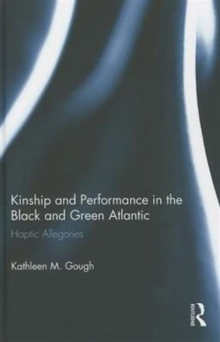 Kinship and Performance in the Black and Green Atlantic : Haptic Allegories Hardback

Kinship and Performance in the Black and Green Atlantic advances an innovative and compelling approach to writing comparative studies of performance in transnational, intercultural relation to one another.

Its chosen subject in this case is the cultural and political intersection of African and Irish diasporic peoples and movements. Gough approaches her subject via five key "flashpoints" in Black/Green relations, moving from the mid-nineteenth century to the early twenty-first century.

In turn, each of these is related to mediums of performance that were prevalent at the time, such as abolitionist oratory and melodrama, photography and tableaux, architecture and folk drama, television and political demonstrations, and visual art and dramaturgy. By examining the unlikely kinship between social actors such as Ida B.

Wells and Maud Gonne, Lady Augusta Gregory and Zora Neale Hurston, and Bernadette Devlin and Alice Childress, along with a host of old and new theatrical "characters," this book explores how a transmedial investigation of gender, community, and performance allows for a revision of historiography in Atlantic studies, while the study itself revises and reimagines key concepts central to performance studies. In 2014 Kinship and Performance was given the Errol Hill Award for Outstanding Scholarship in African American Theatre from the American Society for Theatre Research.