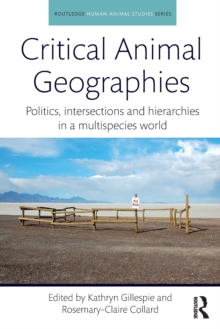 It works toward a more radical politics and theory directed at the shifting boundary between human and animal.

Chapters draw together feminist, political-economic, post-humanist, anarchist, postcolonial, and critical race literatures with original case studies in order to see how efforts by some humans to control and order life - human and not - violate, constrain, and impinge upon others.

Central to all chapters is a commitment to grappling with the stakes - violence, death, life, autonomy - of human-animal encounters.

Equally, the work in the collection addresses head-on the dominant forces shaping and dependent on these encounters: capitalism, racism, colonialism, and so on.

In doing so, the book pushes readers to confront how human-animal relations are mixed up with overlapping axes of power and exploitation, including gender, race, class, and species.