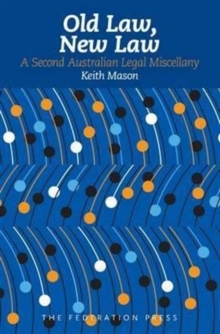 Old Law, New Law follows the author's Lawyers Then and Now in offering a miscellany of genuine legal stories drawn from Australian legal history as well as its modern law.

If there is any change of focus, this work looks at the people of the law through the prism of established or changing legal doctrines and processes. The chapter headings will show that quirky humanity intrudes into the most doctrinaire of fields (such as statutory interpretation and tort law) and that law intrudes into every facet of human life (including food, drink and sex).

As in the former work, there is much comparing of attitudes past and present, while observing the underlying constancy of human values and biases within every corner of the law. Readers will discover:the constitutional distinction between financial and moral bankruptcy the New South Wales judge who responded to a submission on behalf of the Queensland Commissioner for Railways by stating 'You don't think we are going to let you banana-benders get away with that, do you?' Chief Justices who entered dodgy marriages, committed contempts of court or were described as 'sexy' by litigants they encountered judges who upheld appeals from their own judgments strange aspects of matrimonial law and lore, including 'wife sales' and forced outcomes of the biblical 'one flesh' concept some (rare) sightings of appellate judges abusing each other several instances of cannibalism and the law.