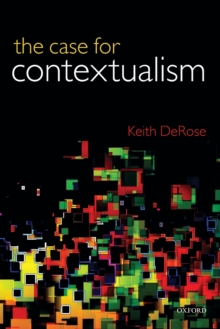 Contextualism is the view that theepistemic standards a subject must meet, in order for a claim attributing "knowledge" to her to be true, do vary with context.

This has been hotly debated in epistemology and philosophy of language during the last few decades.

In The Case for Contextualism Keith DeRose offers a sustained state-of-the-art exposition and defense of the contextualist position, presenting and advancing the most powerful arguments in favor of the view and against its "invariantist" rivals, and responding tothe most pressing objections facing contextualism.