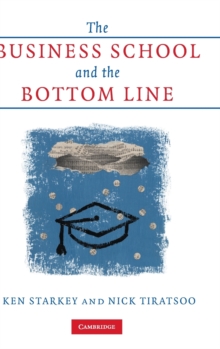 The Business School and the Bottom Line Hardback

In recent decades, business schools have become important components of higher education throughout the world.

Yet, surprisingly, they have received little serious attention.

This book provides a sober and evidence-based assessment, charting the history and character of business schools in the light of current debates about the role of universities and the evolution of advanced economies.

Previous commentators have viewed business schools as falling between two stools: lacking in academic rigour yet simultaneously derided by the corporate world as broadly irrelevant.

However, over-concern with criticism risks ignoring the benefits of reform.

What business schools need is reconfiguration based on new relationships with academia and business.

Such change would deliver institutions that are truly fit for purpose, allowing them to become key players in the 21st century's emergent knowledge societies.

This timely critique should be read by academics and policy-makers concerned with the present state and future development of business education.