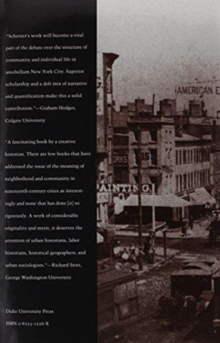 by Kenneth A. Scherzer

Scherzer contends may have more to do with ideology and nostalgia than with historical accuracy.

Employing a wide array of sources, from census reports and church records to police blotters and brothel guides, he documents the complex composition of neighborhoods that defy simple categorization by class or ethnicity.

From his account, the New York City neighborhood emerges as a community in flux, born out of the chaos of May Day, the traditional moving day.

The fluid geography and heterogeneity of these neighborhoods kept most city residents from developing strong local attachments.

Scherzer shows how such weak spatial consciousness, along with the fast pace of residential change, diminished the community function of the neighborhood.

New Yorkers, he suggests, relied instead upon the "unbounded community," a collection of friends and social relations that extended throughout the city. With pointed argument and weighty evidence, The Unbounded Community replaces the neighborhood of nostalgia with a broader, multifaceted conception of community life.

Depicting the neighborhood in its full scope and diversity, the book will enhance future forays into urban history.