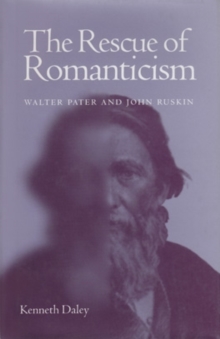 The Rescue of Romanticism : Walter Pater and John Ruskin Hardback

Valuable and timely in its long historical and critical perspective on the legacy of romanticism to Victorian art and thought, The Rescue of Romanticism is the first book-length study of the close intellectual relationship between Walter Pater and John Ruskin, the two most important Victorian critics of art.

Kenneth Daley explores the work and thought of both writers in context with other Victorian writers, and enlarges the issues at stake between them, connecting these issues to ongoing artistic, cultural, and political concerns of the modern world.

Professor Daley gives a more finely honed picture than ever before of romanticism's emergence as a literary concept in Victorian England, detailing the political differences that characterize the opposition between John Ruskin and his younger contemporary, Walter Pater, over the nature of romanticism.

His discussion of Ruskin's Oxford lectures and their timing in Pater's developing career refresh the intersections of the two bodies of work and the portrait of the Victorian period in general.