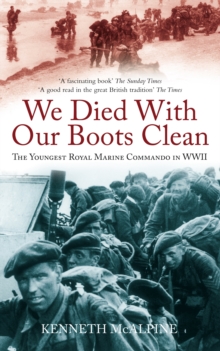 We Died With Our Boots Clean : The Youngest Royal Marine Commando in WWII Paperback / softback

At the age of seventeen, Kenneth McAlpine ran away from the Repton school to join Churchill's new elite special force, the Royal Marine Commandos.

As the youngest member of the youngest commando force, after three months he found himself fighting on the beaches of Normandy.

In We Died With Our Boots Clean, McAlpine tells his own unique story of World War II and his highly eventful military career.

From an unusual encounter with Montgomery and Patton, a concerted attempt to kill a sergeant major and his best friend's arrest for swearing at the Queen of Holland, McAlpine paints a fascinating picture of commando life and the harsh training that prepared soldiers for frontline combat in an elite unit.

Full of absorbing anecdotes such as his time in a military prison and a rescue operation at a concentration camp, this book is an essential part of a World War II enthusiast's library.