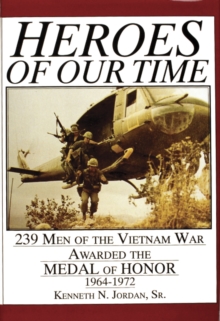 Heroes of Our Time contains all 239 Medal of Honor citations such as this excerpt: ...His rifle ammunition expended, he seized two grenades and, in an act of unsurpassed heroism, charged toward the entrenched enemy weapon.

Hit again in the leg, this time with a tracer round which set fire to his clothing, Sgt.

Robinson ripped the burning clothing from his body and staggered indomitably through the enemy fire, now solely concentrated on him, to within grenade range of the enemy position.

Sustaining two additional chest wounds, he marshalled his fleeting physical strength and hurled the two grenades, thus destroying the enemy position, as he fell dead upon the battlefield...

Along with the citations are newspaper accounts of various battles.

Heroes of Our Time is a look at the courage of American soldiers in Vietnam.