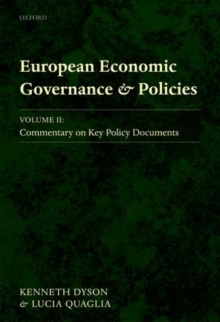 The creation of the single European currency and of the European Central Bank in the context of a wider economic and political union has been one of the most important projects of institution-building and policy development in post-1945 Europe.

This book seeks both to place this project in its longer-term historical context and to complement the many secondary texts on this highly topical subject.

It brings together for the first time, and offers analyticalcommentary on, the classic documents relevant to the process of constructing and developing European economic governance based on Economic and Monetary Union (EMU).

The book includes the key documents concerned with developing and implementing policies from the period of inception and launch of Europeanmonetary union on 1 January 1999 to the end of its first decade and the onset of the global financial and economic crisis.

The book makes available a large collection of documents about the policies and governance of the European economy, based around the creation of EMU.

They are presented in a convenient and accessible form both for scholars and students and for market and policy practitioners concerned with the development of Europe's political economy.

Those who are new to the subject should benefit from easy access to basic texts and related commentaries and references.

Those who are more familiar with EMUwill have a single key source of comprehensive and up-to-date references in terms of which past and current debates and policies have been framed.

The primary sources that are made available here would otherwise be costly to access and use.

In many cases documents have been rescued from obscurity.

Theiravailability should help to inform and enrich public debate about the historical development of EMU and how the European economy is governed.

In addition, the book offers extensive commentaries at the beginning of each section as well as on individual documents that seek to clarify changes in meanings and understandings over time and the background to these changes.