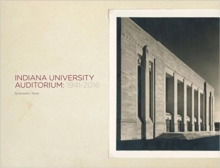 The ceremony-both joyous and solemn, as World War II loomed on the horizon-established the magnificent new building as the central gathering place for the university's entertainment, convocations, and ceremonies for the next seventy-five years. Built with a combination of state and federal New Deal public works funds, the Auditorium was the vision of IU's legendary president, Herman B Wells, whose foresight placed it at what was to become the center of Bloomington's beautiful campus.

Wells retrieved from storage series of dramatic (and somewhat controversial) murals by Thomas Hart Benton from the 1933 Chicago World's Fair and had them installed in the Auditorium's lobby.

He also envisioned the Auditorium as the centerpiece of a Fine Arts Plaza, which later included the Henry Radford Hope School of Fine Arts, and, many years later, the IU Cinema. Whether welcoming the Metropolitan Opera's Aida, the former Soviet premier Mikhail Gorbachev, or the folk singing legends Peter, Paul, and Mary, Auditorium audiences knew that they would be hearing and watching performers and personalities at the pinnacle of their careers. Drawing from a rich treasury of archival photos, news clippings, and interviews, author Kenneth Turchi captures the Auditorium's seventy-five-year history with a brief glimpse into its future.