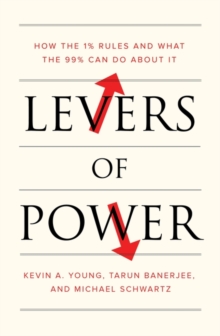 Levers of Power : How the 1% Rules and What the 99% Can Do about It Paperback / softback

Understanding the power of the corporations and how to take the struggle directly to them It's no secret that "the 1%" - the business elite that commands the largest corporations and the connected network of public and private institutions- exercise enormous control over U.S. government. While this control is usually attributed to campaign donations and lobbying, Levers of Power argues that corporate power derives from control over the economic resources on which daily life depends.

Government officials must constantly strive to keep capitalists happy, lest they go on "capital strike" - that is, refuse to invest in particular industries or locations, or move their holdings to other countries - and therefore impose material hardship on specific groups or the economy as a whole.

For this reason, even politicians who are not dependent on corporations for their electoral success must fend off the interruption of corporate investment.

Levers of Power documents the pervasive power of corporations and other institutions with decision-making control over large pools of capital, particularly the Pentagon.

It also shows that the most successful reform movements in recent U.S. history - for workers' rights, for civil rights, and against imperialist wars - succeeded by directly targeting the corporations and other institutional adversaries that initiated and benefitted from oppressive policies.

Though most of today's social movements focus on elections and politicians, movements of the "99%" are most effective when they inflict direct costs on corporations and their allied institutions.

This strategy is also more conducive to building a revolutionary mass movement that can replace current institutions with democratic alternatives.