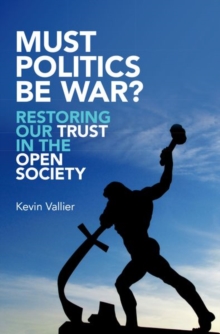 Must Politics Be War? : Restoring Our Trust in the Open Society Hardback

Americans today are far less likely to trust their institutions, and each other, than in decades past.

Many believe that our previously high levels of trust and bipartisanship were a pleasant anomaly and that we now live under the historic norm.

Seen this way, politics itself is nothing more than a power struggle between groups withirreconcilable aims: contemporary American politics is war because political life as such is war. Must Politics Be War? argues that our shared liberal democratic institutions have the unique capacity to sustain social and political trust between diverse persons.

In succinct, convincing prose, Kevin Vallier argues that constitutional rights and democratic governance prevent any one ideology or faith from dominating all others, thereby protecting each person's freedom to live according to her values and principles.

Illiberal arrangements, where one group's ideology or faith reigns,turn those who disagree into unwilling subversives, persons with little reason to trust their regime or to be trustworthy in obeying it.

Liberal arrangements, in contrast, incentivize trust and trustworthiness because they allow people with diverse and divergent ends to act with conviction.

Those with opposingviewpoints become trustworthy because they can obey the rules of their society without acting against their ideals.

Therefore, as Vallier illuminates, a liberal society is one at moral peace with a politics that is not war.