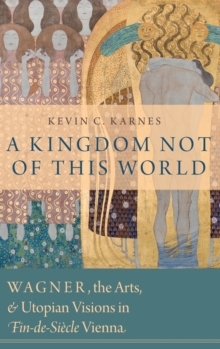 A Kingdom Not of This World : Wagner, the Arts, and Utopian Visions in Fin-de-Siecle Vienna Hardback

Typically regarded as reflecting on a culture in social, political, or psychological crisis, the arts in fin-de-siecle Vienna had another side: they were means by which creative individuals imagined better futures and perfected worlds dawning with the turn of the twentieth century.

As author Kevin C. Karnes reveals, much of this utopian discourse drew inspiration from the work of Richard Wagner, whose writings and music stood for both a deluded past andan ideal future yet to come.

Illuminating this neglected dimension of Vienna's creative culture, this book ranges widely across music, philosophy, and the visual arts.

Uncovering artworks long forgotten and providing new perspectives on some of the most celebrated achievements in the Western canon, Karnesconsiders music by Mahler, Schoenberg, and Alexander Zemlinsky, paintings, sculptures, and graphic art by Klimt, Max Klinger, and members of the Vienna Secession, and philosophical writings by Nietzsche, Schopenhauer, and Maurice Maeterlinck.

Through analyses of artworks and the cultural dynamics that surrounded their creation and reception, this study reveals a powerful current of millennial optimism running counter and parallel to the cultural pessimism widely associated with the period.

Itdiscloses a utopian discourse that is at once beautiful, moving, and deeply disturbing, as visions of perfection gave rise to ecstatic artworks and dystopian social and political realities.