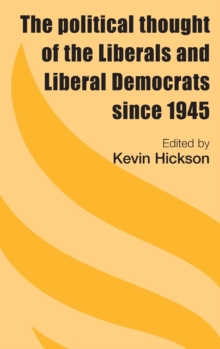 This book provides the most comprehensive analysis of the post-war political thought of the Liberals and Liberal Democrats to date.

The rationale of the book stems from a belief that contemporary debate over the party's future ideological direction can only be fully appreciated by placing it within a broader historical context. The book begins by outlining the three dominant ideological traditions within the Liberals and Liberal Democrats - namely, classical liberalism, the 'centre' and social liberalism.

The main ideas, policies and personalities associated with each tradition are evaluated.

Leading experts in the field then examine a range of themes and issues including constitutional reform, decentralization, political economy, social morality, internationalism and political strategy.

The final section consists of three commentaries from different ideological perspectives written by leading Liberal Democrat MPs - Vincent Cable, David Howarth and Steve Webb. In adopting a new approach to the Liberals and Liberal Democrats and in combining expert analysis with political commentary, this book will be of interest to students and the general reader alike. -- .