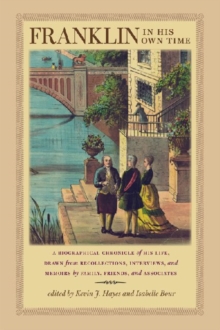 Franklin in His Own Time : A Biographical Chronicle of His Life, Drawn from Recollections, Interviews and Memoirs by Family, Friends and Associates Paperback / softback

In his time Benjamin Franklin (1706-1790) was the most famous American in the world.

Even those personally unacquainted with the man knew him as the author of Poor Richard's Almanack, as a pioneer in the study of electricity and a major figure in the American Enlightenment, as the creator of such life-changing innovations as the lightning rod and America's first circulating library, and as a leader of the American Revolution.

His friends also knew him as a brilliant conversationalist, a great wit, an intellectual filled with curiosity, and most of all a master anecdotist whose vast store of knowledge complemented his conversational skills.

In Franklin in His Own Time, by reprinting the original documents in which those anecdotes occur, Kevin Hayes and Isabelle Bour restore those oft-told stories to their cultural contexts to create a comprehensive narrative of his life and work.

The thirty-five recollections gathered in Franklin in His Own Time form an animated, collaborative biography designed to provide a multitude of perspectives on the "First American." Opening with an account by botanist Peter Kalm showing that Franklin was doing all he could to encourage the development of science in North America, it includes on-the-spot impressions from Daniel Fisher's diary, the earliest surviving interview with Franklin, recollections from James Madison and Abigail Adams, Manasseh Cutler's detailed description of the library at Franklin Court, and extracts from Alexander Hamilton's unvarnished Minutes of the Tuesday Club.

Franklin's political missions to Great Britain and France, where he took full advantage of rich social and intellectual opportunities, are a source of many reminiscences, some published here in new translations.

Genuine memories from such old friends as Thomas Jefferson and John Adams, as opposed to memories influenced by the Autobiography, clarify Franklin's reputation.

Robert Carr may have been the last remaining person who knew Franklin personally, and thus his recollections are particularly significant.

Each entry is introduced by a headnote that places the selection in its historical and cultural contexts; explanatory notes provide information about people and places; and the editors' comprehensive introduction and chronology detail Franklin's eventful life.

Dozens of lively primary sources published incrementally over more than a hundred years illustrate the complexity of the man, his mind, and his mannerisms in a way that no single biographer could.