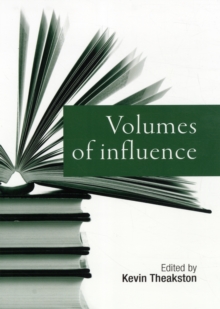 Volumes of influence explores the work of a number of important books and key writers within the academic disciplines of politics and international relations.

It revisits and re-evaluates some of the landmark or classic books in politics and international relations, and assesses the contribution of some of the most influential writers who have played a significant role in the development of these disciplines, who defined their subjects, set agendas and inspired.

They remain significant and relevant, offering insights that help in understanding and analysing contemporary problems, issues and debates.

The book's chapters - written by specialists in their fields - discuss and evaluate: - 'Walter Bagehot, 'The English constitution' (1867)- Maurice Duverger, 'Political parties' (1953)- Seymour Martin Lipset and Stein Rokkan, 'Cleavage structures, party - systems and voter slignments' (1967)- Gerald Curtis, 'Campaigning Japanese style' (1971)- Steven Lukes, 'Power: A radical view' (1974)- Richard Crossman, 'The diaries of a Cabinet Minister' (1975)- Charles Lindblom, 'Politics and markets' (1977)- George Kennan, 'American diplomacy' (1951)- Graham Allison, 'Essence of decision' (1971)- Charles Beitz, 'Political theory and international relations' (1979)- Samuel Huntington, 'The clash of civilizations' (1993)The book will appeal and be of interest to academics and to students of politics and international relations, highlighting the importance of going back and studying some of the foundation literature in their subjects - books and authors which stand the test of time. -- .