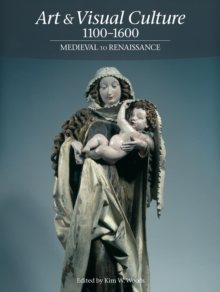 An innovatory exploration of art and visual culture.

Through carefully chosen themes and topics rather than through a general survey, the volumes approach the process of looking at works of art in terms of their audiences, functions and cross-cultural contexts.

While focused on painting, sculpture and architecture, it also explores a wide range of visual culture in a variety of media and methods. "1000-1600: Medieval to Renaissance" includes essays on key themes of Medieval and Renaissance art, including the theory and function of religious art and a generic analysis of art at court.

Explorations cover key canonical artists such as Simone Martini and Botticelli and key monuments including St Denis and Westminster Abbey, as well as less familiar examples.The first of three text books, published by Tate in association with the Open University, which insight for students of Art History, Art Theory and Humanities.

Introduction Part 1: Visual cultures of medieval Christendom 1: Sacred art as the Bible of the Poor' 2: Sacred architecture, Gothic architecture 3: Sacred in secular, secular in sacred: the art of Simone Martini 4: To the Holy Land and back again: the art of the Crusades Part 2: The shifting contexts of Renaissance art 5: Art at court 6: Botticelli 7: Did women patrons have a Renaissance?