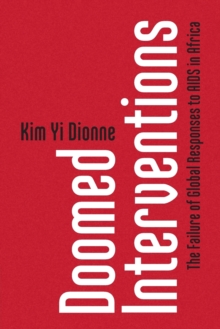 Doomed Interventions : The Failure of Global Responses to AIDS in Africa Paperback / softback

Between 2002 and 2013, bilateral donors spent over $64 billion on AIDS intervention in low- and middle-income countries.

During the same period, nearly 25 million died of AIDS and more than 32 million were newly infected with HIV.

In this book for students of political economy and public policy in Africa, as well as global health, Kim Yi Dionne tries to understand why AIDS interventions in Africa often fail.

The fight against AIDS requires the coordination of multiple actors across borders and levels of governance in highly affected countries, and these actors can be the primary sources of the problem.

Dionne observes misaligned priorities along the global chain of actors, and argues this misalignment can create multiple opportunities for failure.

Analyzing foreign aid flows and public opinion polls, Dionne shows that while the international community highly prioritizes AIDS, ordinary Africans view AIDS as but one of the many problems they face daily.