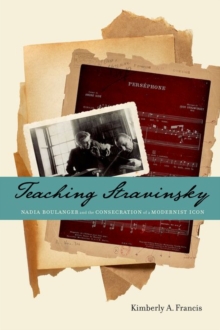 Teaching Stravinsky : Nadia Boulanger and the Consecration of a Modernist Icon Hardback

Within two years, Stravinsky and Boulanger merged their artistic spheres, each influencing and enhancing the cultural work of the other until the composer's death in 1971.

Teaching Stravinsky tells Boulanger's story of the ever-changing nature of her fractious relationship with Stravinksy.

Author Kimberly A. Francis explores how Boulanger's own professional activity during the turbulent twentieth-century intersected with her efforts on behalf of Stravinsky, and how this facilitated her own influential conversations with the composer about his works while also drawing her into close contact with his family.

Through the theoretical lens of Bourdieu, anddrawing upon over one thousand pages of letters and scores, many published here for the first time, Francis examines the extent to which Boulanger played a foundational role in defining, defending, and ultimately consecrating Stravinsky's canonical identity.

She considers how the quotidian events in the livesof these two icons of modernism informed both their art and their professional decisions, and convincingly argues for a reevaluation of the influence of women on cultural production during the twentieth century. At once a story of one woman's vibrant friendship with an iconic modernist composer, and a case study in how gendered polemics informed professional negotiations of the artistic-political fields of the twentieth-century, Teaching Stravinsky sheds new light not only on how Boulanger taught Stravinsky, but also how, in doing so, she managed to influence the course of modernism itself.