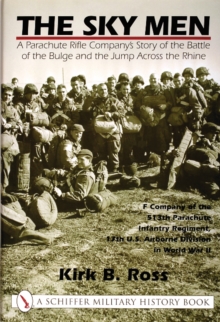 Sky Men: A Parachute Rifle Company's Story of the Battle of the Bulge and the Jump Acrs the Rhine Hardback

by Kirk B. Ross

The Sky Men is the story of F Company of the 513th Parachute Infantry Regiment, 17th U.S.

Airborne Division. They were all volunteers to a new, dangerous, and elite corps a Airborne.

In the midst of the hardest European winter in forty years, the 17th Airborne Division was committed to action against the German Army west of Bastogne, Belgium.

From their first day in action, the green paratroopers a caught up in the toughest fighting of the Bulge when the American Army stood up and began slugging its way back to the start line a attacking through knee deep snow and over bald terrain, demonstrated exceptional courage in closing with the enemy.

In March 1945, Operation Varsity sends F Company parachuting across the Rhine and into the final battle for the conquest of Nazi Germany.

The Sky Men includes many never before used documents, with the personal accounts of nearly one hundred men of F Company and other associated organizations.