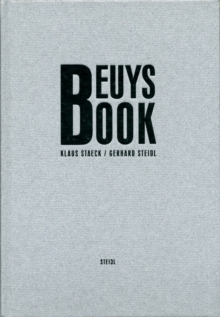 Joseph Beuys was photographed extensively during his life, whether at work, while travelling, or at home.

But only a few photographers had the privileged access and tenacity of Klaus Staeck and Gerhard Steidl.

Graphic artist Staeck and printer/publisher Steidl accompanied Beuys with their cameras from 1970 until his death in 1986.

Staeck and Steidl were part of Beuys entourage, worked closely with him to produce his multiples and objects, and documented intimate aspects of the life of this unmatched artist-performer. These photos reveal Beuys unique charismatic personality that influenced not only those he met, but society and art in general.

Born in 1938 in Pulsnitz near Dresden, Klaus Staeck is one of Germanys most prominent graphic artists.

Renowned for his political posters, Staeck has been president of the Akademie der Kunste in Berlin since 2006.

Steidl has produced Staecks posters throughout his career and has published many of his books including Ohne Auftrag (2001), Pornografie (2005) and Schone Aussichten (2009).

Gerhard Steidl was born in 1950 in Gottingen, Germany, where he continues to live and work. Steidl received his informal printing training from Klaus Staeck and Joseph Beuys, and in 1972, the first Steidl book Befragung der Documenta was published.

Since the mid-1980s, Steidl has published literature including the work of Nobel laureates Gunter Grass and Halldor Laxness.