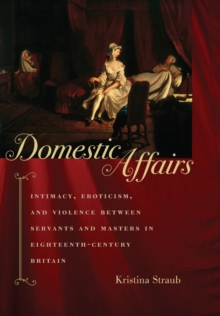 From Daniel Defoe's Family Instructor to William Godwin's political novel Caleb Williams, literature written for and about servants tells a hitherto untold story about the development of sexual and gender ideologies in the early modern period.

This original study explores the complicated relationships between domestic servants and their masters through close readings of such literary and nonliterary eighteenth-century texts.

The early modern family was not biologically defined.

It included domestic servants who often had strong emotional and intimate ties to their masters and mistresses.

Kristina Straub argues that many modern assumptions about sexuality and gender identity have their roots in these affective relationships of the eighteenth-century family.

In examining the interpersonal relationships between the different classes, she offers new ways in which to understand sexuality and gender in the eighteenth century.