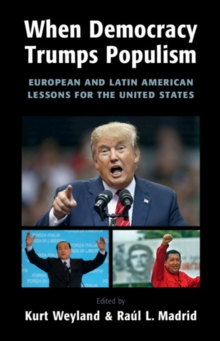 The victory of Donald Trump in the 2016 election left specialists of American politics perplexed and concerned about the future of US democracy. Because no populist leader had occupied the White House in 150 years, there were many questions about what to expect.

Marshaling the long-standing expertise of leading specialists of populism elsewhere in the world, this book provides the first systematic, comparative analysis of the prospects for US democracy under Trump, considering the two regions - Europe and Latin America - that have had the most ample recent experiences with populist chief executives.

Chapters analyze the conditions under which populism slides into illiberal or authoritarian rule and in so doing derive well-grounded insights and scenarios for the US case, as well as a more general cross-national framework.

The book makes an original argument about the likely resilience of US democracy and its institutions.