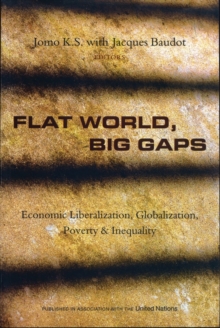 Flat World, Big Gaps critically considers the impact of economic liberalization and globalization on inequality and poverty. The first half surveys the major analytical issues in the recent study of global inequalities.

After a brief survey of different approaches to international income inequalities, the second chapter notes that indicators of economic growth performance as well as international economic inequities have deteriorated in the last quarter-century compared to the 1960s and 1970s. The following three chapters critically consider recent trends as well as their implications from different perspectives.

High global inequalities mean that a very small share of economic growth -- which often exacerbates living conditions for the poor - actually trickles down to the poor, who make up half the world's population.

The second half of the volume surveys recent inequality trends in various parts of the world including the OECD, the USA, Eastern Europe and the CIS economies, Latin America, the Middle East and North Africa, sub-Saharan Africa, India, East Asia and China.