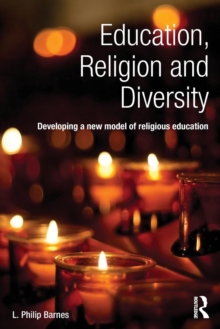 "In this thoughtful and provocative book Philip Barnes challenges religious educators to re-think their field, and proposes a new, post-liberal model of religious education to help them do so.

His model both confronts prejudice and intolerance and also allows the voices of different religions to be heard and critically explored.

While Education, Religion and Diversity is directed to a British audience the issues it raises and the alternative it proposes are important for those educators in the United States who believe that the public schools have an important role in teaching students about religion." Walter Feinberg, Professor Emeritus of Education Policy, Organization and Leadership at the University of Illinois, Urbana-Champaign. "Philip Barnes offers a penetrating and lucid analysis of the strengths and weaknesses of modern religious education in Britain.

He considers a range of epistemological and methodological issues and identifies two contrasting models of religious education that have been influential, what he calls a liberal and a postmodern model.

Essential reading for all religious educators and those concerned with the role of religion in schools."Bernd Schroeder, Professor of Practical Theology and Religious Education, University of Goettingen. "What place, if any, does religious education have in the schools of an increasingly diverse society?

This lucid and authoritative book makes an incisive contribution to this crucial debate."Roger Trigg is Emeritus Professor of Philosophy, University of Warwick, and Senior Research Fellow, Ian Ramsey Centre, Oxford. The challenge of diversity is central to education in modern liberal, democratic states, and religious education is often the point where these differences become both most acute and where it is believed, of all curriculum subjects, resolutions are most likely to be found. Education, Religion and Diversity identifies and explores the commitments and convictions that have guided post-confessional religious education and concludes controversially that the subject as currently theorised and practised is incapable of challenging religious intolerance and of developing respectful relationships between people from different communities and groups within society. It is argued that despite the rhetoric of success, which religious education is obliged to rehearse in order to perpetuate its status in the curriculum and to ensure political support, a fundamentally new model of religious education is required to meet the challenge of diversity to education and to society.

A new framework for religious education is developed which offers the potential for the subject to make a genuine contribution to the creation of a responsible, respectful society. Education, Religion and Diversity is a wide-ranging, provocative exploration of religious education in modern liberal democracies.

It is essential reading for those concerned with the role of religion in education and for religious and theological educators who want to think critically about the aims and character of religious education.