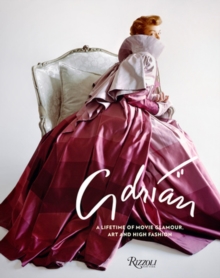 This is a bright, bubbly look at the fashion, art, and homes of Adrian, one of the most celebrated clothing designers of the 20th Century.

Perhaps most well-known for his work at MGM from 1928-1941, Adrian created wearable confections for the likes of Greta Garbo, Lana Turner, Joan Crawford, Judy Garland, and Katherine Hepburn before going on to found one of the most popular and influential fashion labels of the mid twentieth century.

When he wasn t dressing some of the most well-known women of his day, Adrian had a passion for art and design which manifested itself in his impeccably decorated homes and personal paintings and sketches, which are shown here for the first time in years. Adrian: Hollywood Designer is the first book on the famed Hollywood fashion and costume designer to be published with the cooperation of his family.

The book will include an introduction from the designer s son, Robin, as well as a trove of never-before-seen images and anecdotes taken from Adrian s private archives and showing not just his fashions, but also his homes, paintings, family photos, personal writings, and much more.

This will be the definitive book on the life and legend of Adrian.