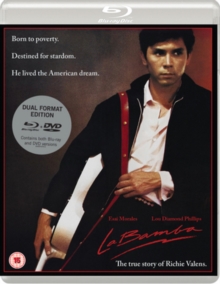 Lou Diamond Phillips stars as Ritchie Valens in this musical biography of the Mexican-American boy who became a rock 'n' roll star at the age of 17.

Beginning as a labourer in the plantations of rural California, Valens' success was such that he would eventually undertake a triumphant tour with the legendary Buddy Holly (Marshall Crenshaw) and The Big Bopper (Stephen Lee).

The film traces his rise to stardom, his relationships with his family and his high school girlfriend Donna (Danielle von Zerneck), and culminates with the tragic plane crash which killed him in 1959.