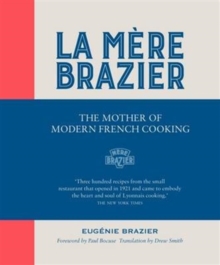 During its heyday, La Mere Brazier was the most famous restaurant in France - a magical gastronomic experience that drew the likes of Marlene Dietrich and various French presidents.

She became and still is today, the inspiration for modern French cooking.

First published in France in 1977, La Mere Brazier is a culinary masterpiece.

Part memoir and part recipe collection, it includes classic French recipes from Lyon, the hotbed of the French culinary scene. La Mere Brazier fills an important gap in culinary history, and is a must-have for anyone interested in classic recipes and French regional cuisine.