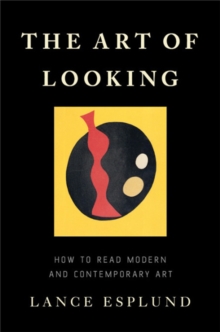 The Art of Looking : How to Read Modern and Contemporary Art Hardback

The landscape of contemporary art has changed dramatically during the last hundred years.

We have seen a painting of a single black square on a white ground, Kazimir Malevich's Black Square (1915), and a hand-signed porcelain urinal, Marcel Duchamp's Fountain (1917).

In Piero Manzoni's Artist's Shit (1961), we got a series of 90 sealed tin cans purportedly containing Manzoni's own excrement.

A decade later, with Chris Burden's Shoot (1971), we saw a performance in which the artist was voluntarily shot in the arm with a rifle.

More recently, Damien Hirst exhibited a shark floating in a glass tank of formaldehyde and fellow British artist Tracey Emin-in her autobiographical installation The History of Painting (1999)-displayed, among other items, her own used tampons. It is no wonder, then, that the art-viewing public is perplexed.

What's going on here? Do today's renowned artists-like earlier masters such as Giotto, Michelangelo, Rembrandt, and Matisse-represent the highest achievements of civilization? Or something else entirely? Have viewers always felt this way; or is their confusion a sign of something new-something exclusive to the experience of today's contemporary art?In The Art of Looking, renowned art critic Lance Esplund shows that works of Modern and contemporary art are not as indecipherable as they might seem to be.

Nor do they represent a dramatic break from the past.

He situates more recent movements in the tradition of art and examines the threads that tie the art of the past to that of the present.

For instance, Esplund elucidates the similarities between Picasso and El Greco; between the ancient Egyptian Pyramids and sculptor Richard Serra's monumental Torqued Ellipses.

The Art of Looking will open the eyes of viewers who think that contemporary art is obtuse, nonsensical, and irrelevant, as well as the eyes of those who think that the art of the past has nothing to say to our present. As our expert guide, Esplund has curated a personalized selection of moving and important works, using them as examples to walk the reader through the formal, emotional, and metaphoric experience of art, illuminating how an artist builds and explores a theme.

Eager to democratize a genre that can feel inaccessible, Esplund empowers viewers to trust their own eyes, guts, and common sense.

With The Art of Looking, readers will have the confidence to evaluate and appreciate galleries and museums for themselves, whether they are looking at a Greco-Roman statue, a Byzantine Madonna, a Rembrandt portrait, a Marina Abramovic performance, or one of Richard Serra's monumental sculptures.