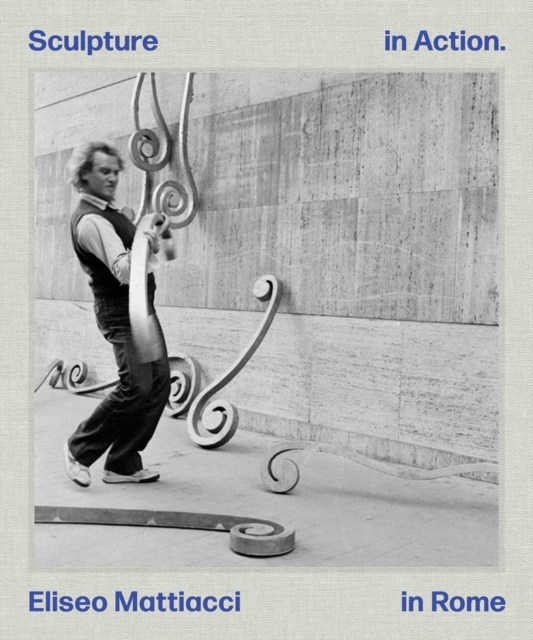 Eliseo Mattiacci: Sculpture in Action in Rome is a fresh examination of the developments in Mattiacci's sculpture from the mid-1960s to the mid-1980s, dates that embrace the two decades he spent living and working in Italy's vibrant capital.

New research by the contributors to this book reveal how the exceptional constellation of studios, galleries and institutional spaces as well as the architectural and landscape settings Rome offered were the crucial factor in Mattiacci's rapid sophistication as an artist.

In the mid-1960s the city was already a major centre for art, literature, theatre and cinema, and the setting for numerous avant-garde performative 'actions' and 'happenings'.

The Piazza del Popolo district was crowded with bars and galleries, and Mattiacci soon became warmly acquainted with various gallerists and artists, including the Arte Povera practitioners Jannis Kounellis and Pino Pascali.

In this challenging and competitive environment Mattiacci sought to establish his own distinctive exploratory style, investigating materials, forms, sounds, presentations and actions in endlessly novel and inventive ways.

The extraordinary Tubo, the long flexible yellow coil of metallic tubing that could be endlessly rearranged and even carried out of a gallery into the streets by files of admirers, was first exhibited in 1967, and made his name.

The following year he staged Lavori in corso, a trio of very popular performances, in the Circo Massimo, which involved spinning huge umbrellas in imitation of the Earth's rotations and revolutions.

Percorso, in 1969, was Mattiacci again in action, this time driving a noisy roadroller into and around a gallery. In the 1970s - a difficult decade of political violence in Italy - Mattiacci continued to explore both outwardly and inwardly.

He was increasingly fascinated by archaeology, antique alphabets and non-literate cultures, notably the USA's First Peoples, and he created actions and presentations that ranged from exhibitions of x-rays of his own inner organs to appearances encased in 'bandaging' and plaster.

In 1981 he first showed the admired Roma, a collection of 50 large sinuous metal shapes inspired by the volutes of classical and Baroque architecture, once again an artwork that is endlessly rearrangeable, indoors or out.

Sculpture in Action is the beautifully illustrated account of Mattiacci's artistic creativity in those decades.