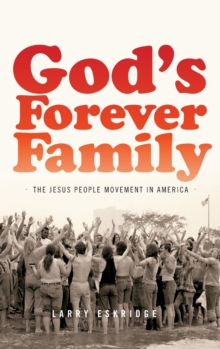 The Jesus People movement of the late 1960s and 1970s was an important force in the lives of millions of American Baby Boomers.

This unique combination of the hippie counterculture and evangelical Christianity first appeared amid 1967's famed "Summer of Love" in San Francisco's Haight-Ashbury district and grew like wildfire in Southern California and in cities like Seattle, Atlanta, and Milwaukee.

In 1971 the growing movement found its way into the nationalspotlight, attracting a great deal of contemporary media and scholarly attention. In the wake of publicity, the movement gained momentum and attracted a huge new following among evangelical church youth who enthusiastically adopted the Jesus People persona as their own.

In the process, the movement spreadacross the country - particularly into the Great Lakes region - and coffeehouses, "Jesus Music" singers, and "One Way" bumper stickers soon blanketed the land. Within a few years, however, the movement faded and disappeared and was largely forgotten by everyone but those who had filled its ranks. God's Forever Family is the first major attempt to re-examine the Jesus People phenomenon in over thirty years.

It reveals that it was one of the most important American religious movements of the second half of the 20th-century. Not only did the Jesus movement produce such burgeoning new evangelical groups as Calvary Chapel and the Vineyard movement, but the Jesus People paved the way for the huge Contemporary Christian Music industry and the rise of "Praise Music" in the nation'schurches. More significantly, perhaps, it revolutionized evangelicals' relationship with youth and popular culture-important factors in the evangelical subculture's emerging engagement with the larger American culture from the late 1970s forward. God's Forever Family makes the case that the Jesus Peoplemovement not only helped create a resurgent evangelicalism but - alongside the hippie counterculture and the student movement - must be considered one of the major formative powers that shaped American youth in the late 1960s and 1970s.