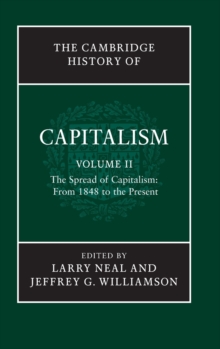 The Cambridge History of Capitalism Hardback

The second volume of The Cambridge History of Capitalism provides an authoritative reference on the spread and impact of capitalism across the world, and the varieties of responses to it.

Employing a wide geographical coverage and strong comparative outlook, a team of leading scholars explore the global consequences that capitalism has had for industry, agriculture, and trade, along with the reactions by governments, firms, and markets.

The authors consider how World War I halted the initial spread of capitalism, but global capitalism arose again by the close of the twentieth century.

They explore how the responses of labor movements, compounded by the reactions by political regimes, whether defensive or proactive, led to diverse military and welfare consequences.

Beneficial results eventually emerged, but the rise and spread of capitalism has not been easy or smooth.

This definitive volume will have widespread appeal amongst historians, economists, and political scientists.