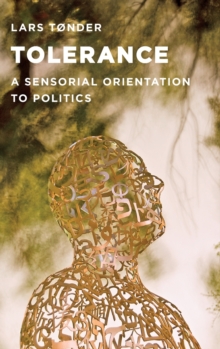 The main task of Tolerance is to reorient discussions in democratic theory so as better to theorize how tolerance can operate as an active force in the context of deep pluralism.

The objective is to develop a theory of active tolerance attentive to the many different ways in which societies can become tolerant, and to discuss what might get lost, conceptually as well as politically, if we don't pay attention to how active tolerance subsists within otherpractices of tolerance.

Tolerance exceeds existing accounts, I argue, not because it cannot be domesticated for the purposes of either restraint or benevolence, but because this domestication does not preclude the possibility of another, more active tolerance. Tolerance develops this argument by mobilizing what I call a "sensorial orientation to politics." While a sensorial orientation does not refute the role of reason in democratic politics, it differs from its intellectualist counterpart by arguing that practices of reason-giving include ways of sensing the world, insisting that reason is always-already sensorial.

A sensorial orientation, in other words, focuses on the embodied conditions of reasoning, which it takes to be neithercompletely synergistic nor immediately present, but reliant on representations, images, and memories, which situate sensory input within historically defined regimes of discourse and sensation, and which assume that sentient beings experience the world through both thought and action, mind and body. Theorists discussed in the book include Seneca, Spinoza, Nietzsche, Marcuse, and Merleau-Ponty, together with Descartes, Locke, Kant, Mill, Rawls, Forst, Scanlon, Taylor, Brown, and Connolly.

Tolerance draws on a critical consideration of these thinkers in order to shed new light on the role of tolerance in both contemporary democratic theory and contemporary public discourse.

The aim is to show how tolerance once again can become a practice of empowerment andpluralization.