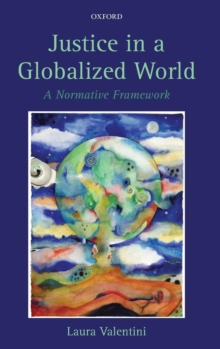 Justice in a Globalized World : A Normative Framework Hardback

While the lives of millions of people are overshadowed by poverty and destitution, a relatively small subset of the world's population enjoys an unprecedented level of wealth.

No doubt the world's rich have duties to address the plight of the global poor.

But should we think of these as duties of egalitarian justice much like those applying domestically, or as weaker duties of humanitarian assistance?

In this book, Laura Valentini offers an in-depth critique of thetwo most prominent answers to this question, cosmopolitanism and statism, and develops a novel normative framework for addressing it.

Central to this framework is the idea that, unlike duties of assistance - which bind us to help the needy - duties of justice place constraints on the ways we maylegitimately coerce one another.

Since coercion exists domestically as well as internationally, duties of justice apply to both realms.

The forms of coercion characterizing these two realms, however, differ, and so the content of duties of justice varies across them.

Valentini concludes that given the nature of existing international coercion, global justice requires more than statist assistance, yet less than full cosmopolitan equality.