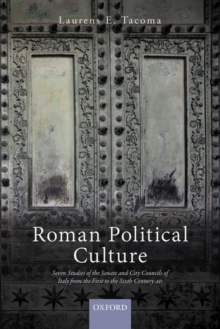 Roman Political Culture : Seven Studies of the Senate and City Councils of Italy from the First to the Sixth Century AD Hardback

This volume offers an innovative analysis of Roman political culture in Italy from the first to the sixth century AD on the basis of seven case studies.

Its main contention is that, during the period in which Italy was subject to single rule, political culture took on a specific form, being the product of the continued existence of two traditional political institutions: the senate in the city of Rome and the local city councils in the rest of Italy.

Under singlerule, the position of both institutions was increasingly weakened and they became part of a much wider institutional landscape, although the fact that they continued to function until the end of the sixth century AD must imply that they retained meaning for their members, even while society as a wholewas undergoing radical changes.

As their powers and prerogatives shrank considerably, their significance became social rather than political as they allowed elites to enact and negotiate their own position in society.

However, the tension between the participatory nature of these institutions and the restriction of their power generated complex social dynamics: on the one hand, participants became locked in mutual expectations about each other's behaviour and were compelled to enact particularsocial roles, while on the other hand they retained a degree of agency.

They were encapsulated in an honorific language and in a set of conventions that regulated their behaviour, but that at the same time offered them room for manoeuvre: this degree of autonomy provides a compelling basis on whichto challenge the prevailing view among historians that deliberative and participatory politics effectively ended with the institution of the Roman monarchy under Augustus.