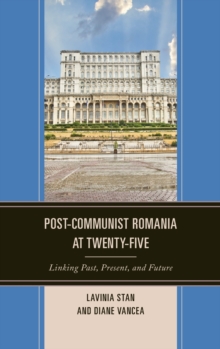 Post-Communist Romania at Twenty-Five : Linking Past, Present, and Future Hardback

2014 marked the 25th anniversary of the collapse of communist regimes in Eastern Europe.

The events of 1989 are widely seen as having ushered in new all-encompassing reforms in almost all areas of life.

In few other places were reforms more contested and divisive than in Romania, a country that suffered greatly under the sultanistic-cum-totalitarian dictatorship of Nicolae Ceausescu, faced the region's only bloody anti-communist revolt, and as such had the longest to travel on the road from communism to democracy.

We now have a generation's worth of experience with these wrenching reforms that have deeply affected Romania's political institutions and political culture, and ultimately allowed it to become a member of the coveted European Union club.

Written by leading experts in the field of Romanian Studies, the chapters focus on the most important factors that have shaped the country's political transformation during the first 25 years of post-communism.