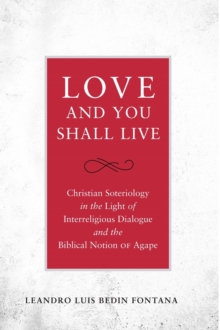 Love and You Shall Live : Christian Soteriology in the Light of Interreligious Dialogue and the Biblical Notion of Agape Hardback

This book rethinks the soteriological premises of the Christian discourse on interreligious dialogue and makes an effort to overcome the conventional typology 'exclusivism-inclusivism-pluralism.' From a hermeneutic perspective, the author sets out to find the answer to this predicament in Jesus' life, message, and practice, given the normative character that these possess for Christianity.

Moreover, a number of critical studies of biblical texts, such as the parable of the Good Samaritan, have suggested that 'interreligious' conflicts were a serious challenge to be faced in early Christianity as well.

By building a bridge between biblical and systematic theology, and seeking consonance with the testimonies of the New Testament, the answer to the issue of religious pluralism suggested here is the eschatological-ethical principle of agape.

For love is the capacity to endure difference while constantly questioning and reformulating one's own identity in the face of the other.

Accordingly, the Christian category of neighbor is valued as a decisive mediation for both the definition of one's own identity and the realization of God's salvific plan.

Thus, soteriology regains the central locus it occupied in Early Christianity as a means of combining God's initiative, human participation, and the growth of His Kingdom. 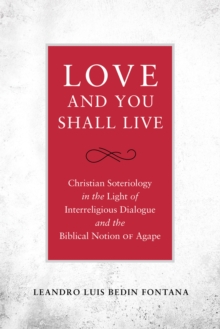 Love and You Shall Live