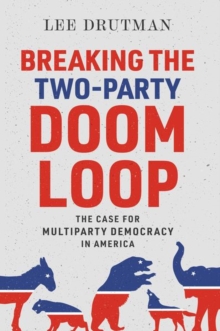 Breaking the Two-Party Doom Loop : The Case for Multiparty Democracy in America Hardback

American democracy is in deep crisis. But what do we do about it? That depends on how we understand what the crisis actually is.

In Breaking the Two-Party Doom Loop, Lee Drutman argues that we now have, for the first time in American history, a true two-party system, with two disciplined, national parties. And it's a disaster. It's driving us apart instead of bringing us together. And it's fundamentally at odds with our anti-majoritarian, compromise-oriented governing institutions.

The conflict is unsustainable. Deftly weaving together history, democratic theory, and cutting edge political science research,Drutman tells the story of how American politics became so toxic, and why the country is trapped in a doom loop of escalating two-party warfare, and why it is destroying the shared sense of fairness and legitimacy on which democracy depends.

The only way out is to have more partisanship-more parties, toshort-circuit the zero-sum nature of binary partisan conflict.

As he shows, the American system used to work because the two parties held within them multiple factions, which made it possible to assemble flexible majorities and kept the temperature of political combat from overheating.

Once the parties became fully nationalized-a long-germinating process thatculminated in 2010-toxic partisanship became the order of the day.

With the two parties divided over competing visions of national identity, Democrats and Republicans no longer see each other as opponents, but as enemies. And the more the conflict escalates, the shakier our democracy feels.