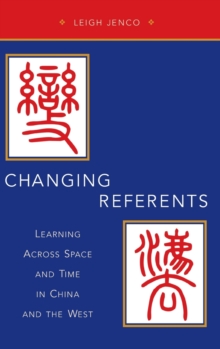 Changing Referents : Learning Across Space and Time in China and the West Hardback

Globalization has brought together otherwise disparate communities with distinctive and often conflicting ways of viewing the world.

Yet even as these phenomena have exposed the culturally specific character of the academic theories used to understand them, most responses to this ethnocentricity fall back on the same parochial vocabulary they critique.

Against those who insist our thinking must return always to the dominant terms of Euro-American modernity, LeighJenco argues - and more importantly, demonstrates - that methods for understanding cultural others can take theoretical guidance from those very bodies of thought typically excluded by political and social theory.

Jenco examines a decades-long Chinese conversation over "Western Learning," starting in the mid-nineteenth century, which subjected methods of learning from difference to unprecedented scrutiny and development. Just as Chinese elites argued for the possibility of their producing knowledge along "Western" lines rather than "Chinese" ones, so too, Jenco argues, might we come to see foreign knowledge as a theoretical resource - that is, as a body of knowledge which formulates methods of argument,goals of inquiry, and criteria of evidence that may be generalizable to other places and times.

The call of reformers such as Liang Qichao and Yan Fu to bianfa - literally "change the institutions" of Chinese society and politics in order to produce new kinds of Western knowledge-was simultaneouslya call to "change the referents" those institutions sought to emulate, and from which participants might draw their self-understanding.

Their arguments show that the institutional and cultural contexts which support the production of knowledge are not prefigured givens that constrain cross-cultural understanding, but dynamic platforms for learning that are tractable to concerted efforts over time to transform them.

In doing so, these thinkers point us beyond the mere acknowledgement of culturaldifference toward reform of the social, institutional and disciplinary spaces in which the production of knowledge takes place.