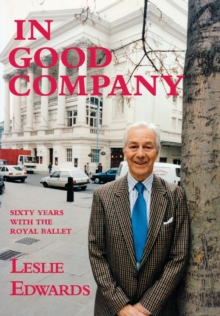 In Good Company : Sixty Years with the Royal Ballet Hardback

No other dancer has matched, nor ever will, Leslie Edwards' career with the Royal Ballet: more than 60 years of performances, starting in January 1933 and continuing even beyond his official retirement in November 1993.

In addition, for the first six years he appeared frequently with Ballet Rambert, and later on he was involved with outside events often featuring Margot Fonteyn and Rudolf Nureyev. And something much more than simply the length and breadth of his career marked it out as special: there was also a great admiration and affection which he won from his audiences and fellow artists.

Over the years, he had a respectable share of leading roles, among them the Lover in Antony Tudor's "Jardin aux Lilas", Frederick Ashton's own role of the Personage in "Les Masques", the title part in Ninette de Valois's "The Rake's Progress".

Those three choreographers all created roles for him in other ballets and so did John Cranko, Robert Helpmann, Andree Howard, Kenneth MacMillan and Leonide Massine However, he was seen far more often in smaller parts, and he showed again and again that these can make just as vital a contribution to the ballet's total effect. It is not by chance that both de Valois and Helpmann remarked to him that he knew how to'make something' out of little material.

In addition to taking part in thousands of performances, he invented and for many years led the Royal Ballet's Choreographic Group, to give ambitious young dancers the opportunity of creative work, and took on the post of ballet master to the Royal Opera, as well as teaching at the Royal Ballet School, instructing the children and extras taken on when the company toured, and organising, on a highly ambitious scale, the annual Christmas parties of the Friends of Covent Garden.