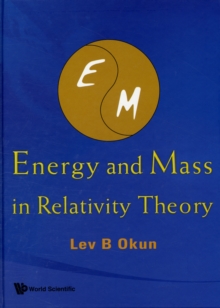 Energy and Mass in Relativity Theory presents about 30 pedagogical papers published by the author over the last 20 years.

Other related subjects are also discussed.According to Einstein's equation E0= mc2, a massive particle at rest contains rest energy which is partly liberated in the nuclear reactions in the stars and the Sun, as well as in nuclear reactors and bombs on the Earth.

The mass entering Einstein's equation does not depend on velocity of a body.

This concept of mass is used in the physics of elementary particles and is gradually prevailing in the modern physics textbooks.This is the first book in which Einstein's equation is explicitly compared with its popular though not correct counterpart E = mc2, according to which mass increases with velocity.

The book will be of interest to researchers in theoretical, atomic and nuclear physics, to historians of science as well as to students and teachers interested in relativity theory.