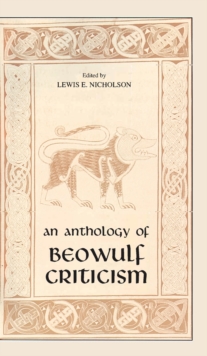 Anthology of Beowulf Criticism, The Hardback

Was the Beowulf-poet a Christian or was he a noble pagan whose outlook had been only slightly colored by exposure to Christian thinking?

This is but one of the fascinating topics discussed in this anthology of criticism on the early medieval masterpiece.

The eighteen contribution to the anthology are arranged chronologically according to the date of the criticism's first publication.

The outstanding scholars whose critical writing is presented here range from the turn-of-the-century critic F.

A. Blackburn through the Englishman J. R. R. Tolkien to such contemporaries as Kemp Malone, Morton Bloomfield, and R.

E. Kaske. Nearly every aspect of the Beowulf is discussed and controverted in terms of literary analysis.

Old English, Old Norse, Latin, and Old French passages are translated in the accompanying text as an aid to undergraduate students meeting Beowulf for the first time.