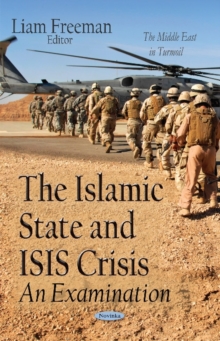 The Islamic State is a transnational Sunni Islamist insurgent and terrorist group that has expanded its control over areas of north-western Iraq and north-eastern Syria since 2013, threatening the security of both countries and drawing increased attention from the international community.

There is debate over the degree to which the Islamic State organisation might represent a direct terrorist threat to the U.S. homeland or to U.S. facilities and personnel in the region. This book addresses select legal questions raised by the use of military force against IS.

Questions addressed in this book include potential sources (and limitations) of presidential authority to use military force against the Islamic State without congressional authorisation; the potential relevance of the 2002 Authorization for Use of Military Force Against Iraq and the 2001 Authorization for Use of Military Force; the applicability of the United Nations Charter to ongoing U.S. military strikes in Iraq and any prospective strikes against IS forces in Syria; and the constraints imposed by the War Powers Resolution upon U.S. military action that has not been authorised by Congress.