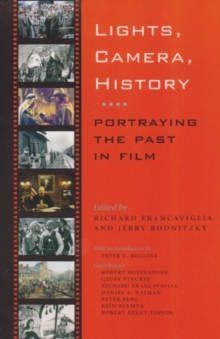 Lights, Camera, History : Portraying the Past in Film Paperback / softback

This important volume addresses a number of central topics concerning how history is depicted in film.

In the preface, the volume editors emphasize the importance of using film in teaching history: students will see historical films, and if they are not taught critical viewing, they will be inclined simply to accept what they see as fact.

Authors of the individual chapters then explore the portrayal of history - and the uses of history - in specific films and film genres.

Richard Francaviglia's chapter on films about the Middle East is especially timely in the post-9/11 world.

One chapter, by Daniel A. Nathan, Peter Berg, and Erin Klemyk, is devoted to a single film: Martin Scorsese's urban history ""The Gangs of New York"", which the authors see as a way of exploring complex themes of the immigrant experience.

Among other themes, he considers the impact of Patton and Platoon on military decisions and interpretations, and of Birth of a Nation and Glory on race relations.

The cumulative effect is to increase the reader's understanding of the medium of film in portraying history and to stimulate the imagination as to how it can and how it should not be used.

Students and teachers of history and cinema will benefit deeply from this informative and thoughtful discussion.