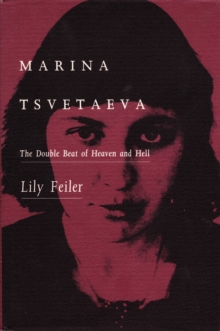 Marina Tsvetaeva : The Double Beat of Heaven and Hell Hardback

"No more passionate voice ever sounded in Russian poetry of the 20th century," Joseph Brodsky writes of Marina Tsvetaeva. And yet Western readers are only now starting to discover what Tsvetaeva's Russian audience has already recognized, "that she was one of the major poetic voices of the century" (Tomas Venclova, The New Republic). Born to a family of Russian intelligentsia in 1892 and coming of age in the crucible of revolution and war, Tsvetaeva has been seen as a victim of her politicized time, her life and her work marked by exile, neglect, and persecution.

This book is the first to show us the poet as she discovered her life through art, shaped as much by inner demons as by the political forces and harsh realities of her day.

With remarkable psychological and literary subtlety, Lily Feiler traces these demons through the tragic drama of Tsvetaeva's life and poetry.

Hers is a story full of contradictions, resisting social and literary conventions but enmeshed in the politics and poetry of her time.

Feiler depicts the poet in her complex relation to her contemporaries-Pasternak, Rilke, Mayakovsky, Mandelstam, and Akhmatova.

She shows us a woman embodying the values of nineteenth-century romanticism, yet radical in her poetry, supremely independent in her art, but desperate for appreciation and love, simultaneously mother and child in her complicated sexual relationships with men and women. From prerevolutionary Russia to Red Moscow, from pre-World War II Berlin, Prague, and Paris to the Soviet Union under Stalin, Feiler follows the tortuous drama of Tsvetaeva's life and work to its last tragic act, exposing at each turn the passions that molded some of this century's most powerful poetry.